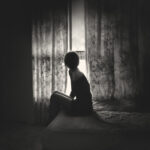 Sometimes I start a blog or a post on my social media accounts with the phrase "I'm sure some of you may know" but that definitely does NOT apply at this time.  No, we ALL know.  We all know what it feels like to be in isolation.  But for those of us who live alone, it can become a whole different beast and can be excruciatingly painful, especially when you suffer from depression.  Isolation, when you are alone is a form of solitary confinement.  Solitary confinement is a punishment in prisons.  Prisoners in isolation will come out stronger or sometimes not come out at all.  There have been times during my solitary confinement when I felt I may not come out at all.

So what do you do when you have these feelings?  You turn to family and friends; your support system.  You reach out in hopes of having some sort of connection to another human being, though sometimes that is a complete miss.  But that's why you have a support system, right?  Turning to my support system has at times been very hurtful, with the exception of those who like me are alone.  If not for those people, I think I may not be sitting here typing right now.  Several times I've reached out or answered my phone or texts merely to find it is someone who is asking for something of me, not to actually ask how I'm coping being alone.  Then there are those who are coupled up in their homes with their significant others who say "I know how ya' feel!"  No, you are not alone so you do NOT know how I feel.  Unless you are ALONE, you do not know how someone alone feels in isolation.  I actually feel offended hearing it.

I don't talk about it much and definitely not to people I don't know.  Honestly, I've tried to not talk about it most of my life but being in isolation for as long as I have has just magnified what I try not to talk about:  Depression.

Yes, perhaps I'm not really alone, I mean, I do have depression with me right now.  Of course, depression is not really what you hope to spend time with.  But after months of being in solitude, here it comes, showing it's ugly face and pushing me to my limits with everything and everyone.

Depression is a conversation most people would like to avoid.  But it is a conversation that truly needs to be had for someone living with it.  I've lost several family members to depression.  I just lost my cousin last year at this time.  People ask how could someone get so depressed that they would kill themself.  I too have questioned in the past how someone could get to that point.  I'm here to tell you, I have absolutely felt that depressed during this isolation and it is very frightening.  Having reached that point and been close to the edge, hopefully, I can shine some light on that question.

Those left behind question if there was something they could have done.  Perhaps, but most people are so wrapped up in their own lives, they just don't have the time, ability, or desire to fight someone else's depression and they can't make the person with the depression fight it either once they're tired of fighting.  The one thing you can do for someone battling depression is to not give up on them.  Call them, chat with them, keep a strong connection.  Those connections keep them tethered and are their only lifeline.

A few things that I believe save me from my battle with depression:  First of all my faith, I am a believer, and I believe that my God loves me and wants me to be happy.  Second, I don't have an alcohol or chemical dependency to weaken my defenses.  And last but most importantly, my children.  Despite the fact that my children have their own lives, they truly love me and the mere thought of them suffering from my depression keeps me alive.  Not to mention the fact that it just continues the cycle that has perpetuated in my family on both sides since before I was born.

So, I wave the white flag and surrender to hope rather than to depression.  I keep my faith and know that there are better tomorrows and that we will come out of this isolation.  Be it together or alone, we will make it through.  If you are suffering from depression and alone during this isolation, have hope, reach out.  I DO know how you feel.