Story published in Chicken Soup for the Soul:  The Spirit of Canada

An Inukshuk to Guide Me Home

No act of kindness, no matter how small, is ever wasted. ~Aesop

Kurt walked into my office. “We’ll be meeting in the boardroom at eleven o’clock.”

“Why the boardroom?” I asked nervously.

“It will be fine,” he replied, as he smiled and left.

Oh no, I thought, what’s going on?  It was my last week of work at the school division, as I was returning home to the United States.  I was a union member, and usually the group just bought a cake and said their goodbyes in the break room.  I figured today there would be an American flag cake, and a casual send-off back to my home country.  But Kurt wasn’t a union member, he was a director. Oh geez, not the boardroom.  My mind began racing.  What on earth was going on?

Being a timid person, I was shaking at the thought of what was coming.  It had been a rocky road coming to Canada.  Just one sentence out of my mouth and heads would turn.  People would ask “What part of the south are you from?” or “Where is Indiana anyway?”

I tried very hard to fit into my new life in Canada.  As the years passed it became clear that in Canada I had found some of the kindest, friendliest and most generous people I had ever met.  In the end, they came to realize that all Americans were not as they had imagined. I was truly blessed.

Now the time had come to say goodbye to my Canadian job.  Still anxious, I gathered up my courage and walked into the boardroom of the school division.  I couldn’t believe my eyes.  The room was filled with union members and administration and board members, and the screen was set up for a presentation.  I was escorted to a table that was covered with gifts and cards. There was a Canadian flag cake.

I couldn’t even speak.  They began the presentation with a warm Canadian send-off to this American girl.  It was clearly not what I was expecting.  As I read the cards, tears filled my eyes. I realized I had been accepted.  I was loved by these wonderful people, and it was overwhelming.

I thanked everyone and told them I would love to give a speech but I was afraid I would cry — just as the tears began to roll down my cheeks.  Everyone laughed and clapped.  I laughed at myself. Then, just when I thought it was over and I could walk out before breaking down completely, the hostess said, “And now we have a special guest to present you with a gift.”  There’s more?  I thought to myself.

The doors to the boardroom had been closed during this time and, as she sat me in a chair, the doors slowly opened.  Through the boardroom doors walked a fully dressed and decorated Canadian Mountie carrying a large present.  I became totally choked up and was simply in awe.  Then my friend gave a beautiful speech about me and how much I was loved.  The Mountie handed me the gift and that’s when I broke down, overcome with emotion.  I opened the package and inside was an Inukshuk.  My friend then told the story of the Inukshuk, and what it represented: “The Inukshuk will always guide you home,” she said. 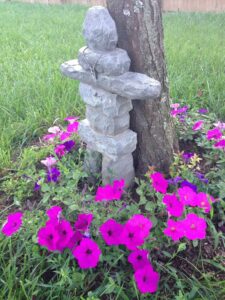 I could not have been more honoured or felt more valued than I did by these wonderful Canadian people.  Years have passed, and I have long since returned to the United States.

Though by birth I am an American, I will always have a little Canadian in my heart.  And in my yard, pointing north, is my Inukshuk, telling me I have another home outside the boundaries of my land.